Eating GMO-free? That’s great! But if non-GMO is your main guide, here’s a wake-up call flying under the radar. Surprise! A whole new generation of fake foods certified GMO-free has just arrived in your favorite grocery. Learn these four food types and how to recognize them:

Our best defense is to eat 100% ORGANIC.

1) Avoid GMO foods. They contain both GMO’s and Glyphosate.

GMO foods are linked to brain fog, bloating, weight gain and disease. GMO foods cause a low-level reaction that slows the brain and clouds the nervous system

GMO foods target the brain and endocrine glands in the center of the brain, the pituitary, hypothalamus, and pineal. When these glands get cloudy or out of balance, your senses can’t integrate as clearly. Brain function and especially intuition, your integrating ability or 6th sense, are lower. GMO foods also damage your body biochemistry, DNA, fertility, and bacterial micro-biome.

Eating organic can improve brain function, sharpen your senses and improve mental clarity. It’s important to learn these primary plants and animals that are genetically modified or fed GMO foods: Avoid these GMO foods, and look for 100% organic varieties.

A leading FDA-registered food safety testing laboratory has found extremely high levels of glyphosate in some of America’s most popular food products. Glyphosate, the active ingredient in Monsanto’s Roundup, is the most heavily used chemical weedkiller in food and agricultural production in human history, as a result of the widespread adoption of genetically engineered crops now grown on more than 175 million acres in the US and over 440 million acres around the world.

New scientific evidence shows that probable harm to human health could begin at ultra-low levels of glyphosate, even 0.1 parts per billions (ppb). Sadly, many popular foods tested for glyphosate measured between 289.47 ppb up to 1,125.3 ppb!

The testing and analysis of 29 popular foods was performed by Anresco Laboratories, San Francisco, an FDA registered laboratory that has done expert food safety testing since 1943. The laboratory found that many well-known products showed high amounts of glyphosate. Original Cheerios, for example, measured 1,125.3 ppb. Other high levels of glyphosate were found in familiar products such as Oreos, Doritos, and Ritz Crackers. Glyphosate degrades in the soil into AMPA,  aminomethylphosphonic acid, an endocrine disuptor found in foods and water.  Here are a few of the test results: 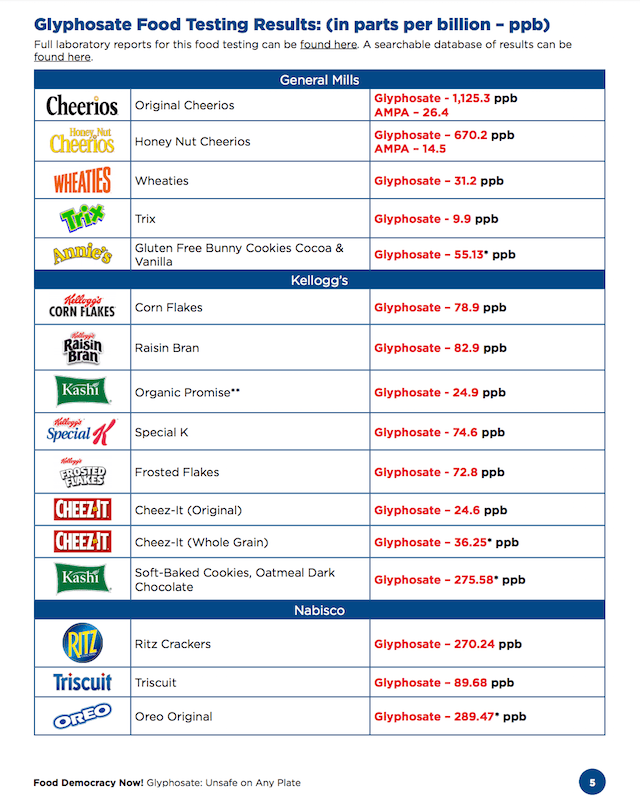 In-Store Brands can be unreliable.
Many groceries claim their private label products are organic. Private label is when your grocery chain buys a product from a food manufacturer and substitute their grocery label on it. OK, but how carefully do they research the health claims? Trader Joe’s insists that all their private label in-store brands products are from GMO free ingredients. However consumer groups are dubious of their due diligence, since Trader Joe’s will not reveal the name of their “third party labs” or ingredient sources.

Safeway says it follows USDA Organic standards for its “O Organic” brand. However Safeway does not reveal its ingredient sources or the certification laboratories. Even more troubling is that Safeway is a member of the Grocery Manufacturer’s Association that spent $11 million to defeat GMO labeling.

Thousands of chemicals are being used on our crops.
Glyphosate, the active ingredient in RoundUp by Monsanto is hot news now, as the most prevalent herbicide in the world. Developed by Monsanto, although their patent has expired, the majority of glyphosate is made in China.

Glyphosate has two primary damaging effects. 1) An endocrine disruptor and toxin that accumulates in the liver and bone marrow, lowering immune system and healthy cell replication. 2) It is a potent anti-biotic that kills or damages gut bacteria.

Atrazine by Syngenta is a the second most common herbicide in the US after Glyphosate. Atrazine is commonly found as a runoff contaminant in rivers, streams, and lakes, it can travel hundreds of miles on airborne dust from the farms where it’s sprayed. Human studies of Glyphosate and Atrazine in utero show impaired sexual development in boys, genital deformations, including undescended testicles and microphallus (micropenis).

Chlorpyrifos was created by the Dow Chemical Company in the 1960s. It is widely used in home and garden settings and is also used on cotton, almonds, oranges, apples and corn crops. Symptoms of low-dose exposure can include headaches, difficulty concentrating, fatigue, nausea, diarrhea and blurred vision. More serious conditions include respiratory paralysis, increased risk of children born with lower IQs and potential for ADHD.

Metolachlor is an herbicide sold by Syngenta, and generic versions are widely available from many other companies. It is used on corn, soy, sorghum, lawns and trees. Metolachlor is recognized by the EPA as carcinogenic. Other side effects include difficulty breathing, nausea, convulsions, and jaundice.

3) A New Generation of Certified non-GMO foods with Glyphosate!

Now that the public is demanding non-GMO, a new generation of toxic foods has arrived in grocery shelves and flying under the radar. Marketed as healthy, these non-GMO products are sprayed with plenty of herbicides and pesticides. Don’t buy them. Let food manufacturers know we want CLEAN FOOD. The Non-GMO Project is busy certifying all kinds of nutritionally empty and toxic products from big food companies. Their stamp of approval may indicate there are no GMO’s, but it’s no indication of healthy food. 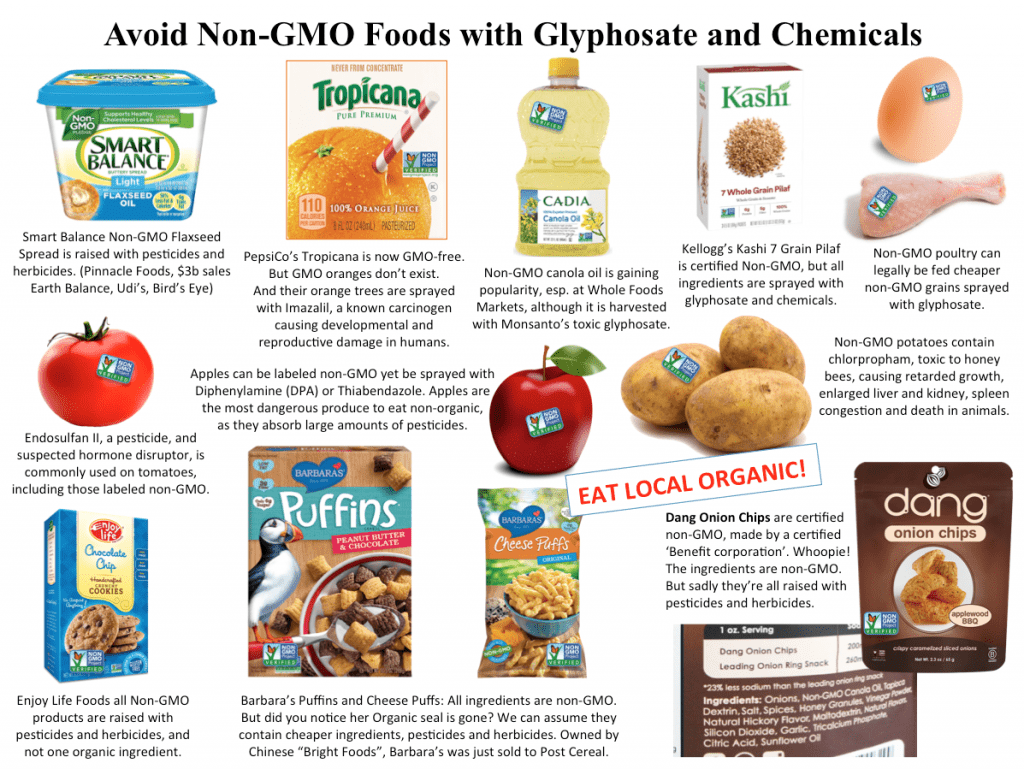 The Healthy Food Movement is Reaching Critical Mass
The food industry’s rapid response to public interest in non-GMO foods shows that they’re really listening to the marketplace. If you’re seriously interested in clean food, then vote with your money. Let the industry know we want CLEAN FOOD, and we want it NOW. We want non-GMO food that’s raised in a sustainable manner, in harmony with the planet, without harmful chemicals. We want no Glyphosate, Atrazine,  Chlorpyrifos, Metolachlor, or any of the thousands of other harmful chemicals that kill bees, humans, and damage the environment. 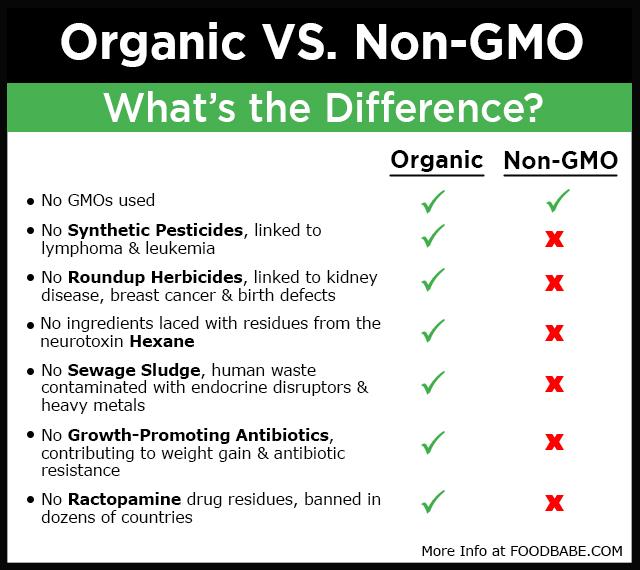 Buy Local, Unprocessed Foods
To avoid both GMO’s and Glyphosate, look for the USDA Organic label, when possible. Talk to your local farmers and find out which ones are using sustainable organic practices. They may not be certified organic, but they’ll know a lot about it, and will be able to guide you. Fresh, local unprocessed fruits and vegetables immediately after picking, are the most nutritious foods on the planet. We don’t really need packaged foods to live. We need unprocessed whole foods. Big industry’s marketing hype is ultimately painting themselves into a corner. Our healthy food movement is so strong that it is reaching critical mass. We need to stay firm. Don’t buy the hype, and vote with your wallet for CLEAN UNPROCESSED FOOD.

Eating GMO-free is good, but it doesn’t rule out toxic pesticides or herbicides used on non-GMO crops. To protect yourself from all farming chemicals, choose 100% Organic.

You are a veritable culinary artist, magician and alchemist!!!

“Dear Jane, I am filled with boundless awe and gratitude with every new recipe of yours that I try! Your deliteful sense of humor, genius, ingenuity, creativity, precision, fine gourmet taste, have brought such joy to my life! After spending too much time in the dungeon of too many food limitations and restrictions, this is an utter relief, to return to deliciousness – Whew! You are a veritable culinary artist, magician and alchemist!!! Wow, Baby! – Thank You!!!!! In deepest gratitude, Ruth